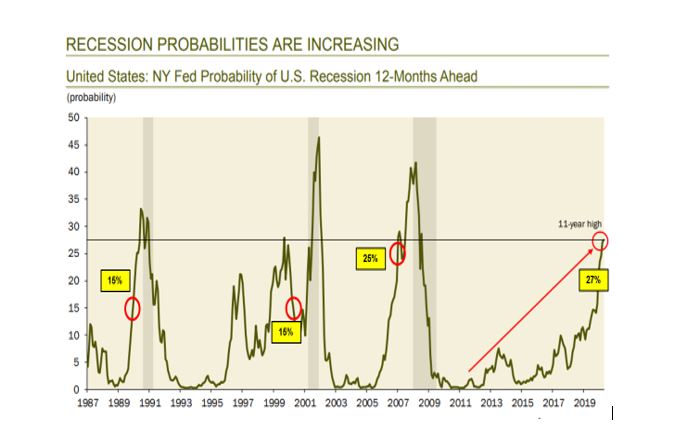 When I say Recession 2020 most people probably feel a tinge of fear and even denial. The Great Recession of 2008 still looms heavy on most people?s memories.

I’m currently reading the Harry Potter series with my Daughters and it’s interesting to me how well JK Rowley nailed human emotion and its response to fear. As I’ve talked with people about the next recession I get the same mix of opinions. Some people hear the word Recession and figuratively shutter from memories of how the last recession hit them. Others are in denial and believe there is no way we’re even close to a recession. But a few also see it coming and are taking steps to prepare for it.

When I tell you a Recession is coming I don’t mean to frighten you but rather I hope you’ll look at the evidence and take advantage of the warning to protect yourself and those you love. Don’t be like the wizard that fears the name Voldemort. Change the way you feel about the Recession and let this recession be a good thing for you.

First off, YES we are heading for a new Recession and I will show in this article why I feel so strongly about that. But in this and the next article, I’d like to help prepare your mind and attitude so you can be ready for the Recession and benefit from it. The reality is that for those who understand recessions a Recession actually creates more opportunities than hardships. But the vast majority of people do not understand them and that’s why they cause so much damage.

Why am I confident that we’re heading for Another Recession?

Answer: Patterns. As a society/economy we are driven by patterns. If you know what to look for and how to interpret it, you can predict with accuracy what’s coming.

The following slides are provided by the analyst Barry Habib of MBS Highway. Barry is a master at seeing market fluctuations and someone I highly recommend. Visit www.mbshighway.com for more information. 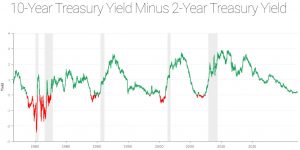 This chart shows the relationship between the 10 yr treasury bond and the 2-year treasury bond since 1975. Think of this as the CD you can buy at a bank. When you buy longer-term CDs like a 5 yr your return should be higher than a shorter-term like a 6 month CD. The same should apply to Treasury bonds. You would expect the 10 years to always pay more than the 2 years but as you can see, there are periods (shown in red) where the 2 year pays more than the 10 years. You can also see the gray horizontal stripes on this graph, these represent periods of Recession.

Right before each Recession, the 2 years outperform the 10 years. Why is this? Because the market is a master at predicting the future. The 10-year bond is very responsive to inflation and inflation is higher when the economy is booming, but when the economy is slow, inflation drops which causes the 10 yr bond to have a lower return.

Looking forward you can see the graph is getting very close to that negative red area which would mean the 10 yr bond is getting nervous and a recession is imminent. 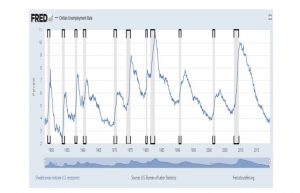 This is the unemployment rate since 1950. Most people associate recessions with high unemployment. And they are partially right but also very wrong in their perception. The misconception is that low unemployment means a strong economy and a recession must be nowhere in sight.

This graph shows the true relationship between unemployment. In reality, unemployment is always at its lowest point just as we enter the recession then it shoots up to its highest point just as we exit the recession. By the graph you can see again that our current unemployment is the lowest it’s been since the last recession and really the lowest it’s been since 1970. So ask yourself, is this a good sign or a bad sign in terms of a Recession. 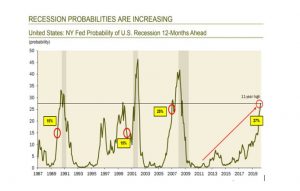 This graph shows the FED’s historical predictions on whether or not they believe we’re entering a recession within the next 12 months.

The Fed’s current prediction is only a 27% probability rate that we’ll enter a recession in the next 12 months. That doesn’t seem like a lot but compare that to historical predictions.

Based on their success rate historically it’s pretty obvious what they are really saying with a 27% probability rate and talks of lowering rates.

I’m sharing this information because I’m a big believer that “knowledge is power”. If you see a Bus speeding toward you, your chances of jumping to safety are exponentially greater than if you don’t see it coming. The Next Recession is coming and if you’re ready it could be the greatest thing that’s ever happened to you financially.

In the coming weeks and months, I’ll be publishing additional articles and videos with tips on how you may benefit from Recession 2020. So be sure to like and subscribe to my pages on Facebook and Youtube.